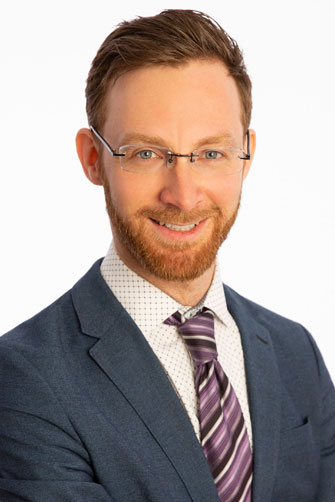 Tobin Lippold was born in Toronto and raised in the state of Vermont, where he was homeschooled until the age of 14. He pursued his undergraduate studies at Concordia University in Montreal, where he was awarded a degree in Electroacoustics Studies, which involves the study of musical composition and production using electronics. His success in this program led to his admission to the McGill University Faculty of Law, where he obtained degrees in both civil and common laws.

While at McGill, Tobin put his audio production skills to work developing podcasts for Inter Gentes, the McGill Journal of International Law. He also served as 2L Class President, volunteered at the Legal Information Clinic at McGill, and was employed as a student editor for the American Journal of Comparative Law. He spent his final year on exchange in Berlin, Germany, where he incorporated the perspectives of European legal systems into his creative legal toolbox. Tobin speaks French and German and can assist clients in these languages.

Tobin completed his articles and began his career as a lawyer in the city of Timmins in northern Ontario, practicing a combination of family law, criminal law, wills and estates, and real estate law. During his time there, he appeared before the Ontario Court of Justice and the Superior Court of Justice on a regular basis and had carriage of two complete trials. He also served as Vice President of the Cochrane Law Association, where he organized community events and interfaced with other local organizations to advocate for underrepresented groups.

As a Vermonter, Tobin is right at home in the natural beauty and friendly atmosphere of the North Okanagan. When he’s not steadfastly pursuing his client’s interests, you can be sure to find him either exploring the outdoors by bike, canoe, or snowboard, or experimenting with synthesizers in his home studio. He maintains fluency in French and German.